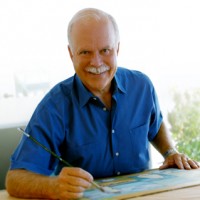 Paul Brent is a Florida artist whose work is known worldwide.  His paintings in watercolor and oil have deftly portrayed the many aspects of the area, capturing innate beauty on paper and canvas.

He is best known for his idyllic watercolors of coastal life and is often referred to as America’s best known coastal artist.

His work has shown constant progression and change throughout his career.  The first pieces of artwork that he sold in 1976 were pen and ink drawings of coastal wildlife that he tinted with light washes of watercolor.

In 1982, after some experimentation, he launched a new style that featured a painted wash background with drips and splashes of watercolor that ran off the image area.

He experimented with adding texture and depth to the watercolor.  On top of this loose background, the artist would paint detailed, almost scientific, renderings of tropical fish, birds, shells, and flowers along with geometric shapes of French curves, triangles, circles, and sometimes three-dimensional shapes.

This was a blend of his architectural training plus his watercolor techniques.

He called this style a “Watercolor Montage."

As this period evolved, his work became more realistic with fewer splashes and geometric shapes.  The white edge of paper remained, but instead of a drip edge, he moved to an irregular edge that enclosed an inner image painted more deeply.  The inner image continued past that edge and flowed past the border.

He called this style a "Structured Vignette."

Beginning in 2000, Paul Brent's work took another turn when he began to paint in oil, first on tempered board that he hand-gessoed, and later on, canvas.

His first oil paintings reflected the transparent tradition of watercolors, but he soon moved on to richer layered paintings that explored the depth of color possible with oil paint.

His latest work once more has the feeling of collage as he works with both watercolor and oil to create images that are graphically composed.

Paul Brent was born in Oklahoma City in 1946. His father, Paul Leslie Brent, and his mother, Aledo Render Brent, were both educators and descendants of Oklahoma pioneer families.

From the age of five until he was thirteen, Paul Brent lived in southwest Oklahoma. After graduating from high school, he majored in art at California State University at Long Beach.

After two years, he changed his major to architecture and transferred to the University of California at Berkeley.  He completed his Bachelor of Architecture degree in 1968.

Following graduation, he joined the Air Force where, after training, he was stationed at Tyndall Air Force Base in Panama City in 1969.

His work has been included in museum shows as well as one-man shows in art galleries throughout the U.S.

Paul Brent began publishing prints of his watercolors in 1978, and by 1986 his prints were sold worldwide.  He began licensing his artwork in 1988 and opened a gallery in Panama City in 1990. In 1992 his wife, Lana Jane Lewis-Brent, joined him in business as president and business manager.

His images are now licensed to over 90 companies worldwide. These products appear in both specialty shops, major chains, and online.

The artist's accomplishments include being inducted into the Society of Illustrators in New York.  He later had a one-man show in their gallery.

The May 2006 issue of Coastal Living Magazine profiled Paul Brent in an article titled “Watercolor Memories." He was also included in an article in the Wall Street Journal that described the phenomena of artists achieving success outside of the New York gallery scene.

He has created artwork for fundraising posters and limited edition prints for organizations such as FSU Panama City Campus, the New Orleans Aquarium, and the Sanibel Jazz Festival.  In 2005 his oil painting, Abstract Violin, was selected for inclusion in the publication Culture Builds Florida’s Future, produced by the Florida Department of State Office of Cultural and Historical Program.

He was asked to create a Christmas ornament for the White House Christmas tree for Christmas 2008. He designed the artwork for the 90-foot water tower in Panama City, Florida, and has completed murals for the Bay County Library, the technology building for Gulf Coast State College in Panama City, and a 16’ x 19’ mural in downtown Panama City.

Paul has been active in arts and planning organizations both locally and in the state of Florida.  He served on the board of Bay Arts Alliance and was president for four years.  He was on the board of the Friends of the Bay County Libraries and the Greater Downtown Association.  He also served as a board member and Secretary on the Florida Arts Council and was a board member of the Florida Humanities Council.

He painted two life-sized dolphins for the community’s “Dolphin Splash” fundraising event and has participated in the Covenant Hospice Mask Parade.  In 2009 he served as chairman of the Panama City Community Redevelopment Agency.

For the past 29 years, Paul Brent has sponsored and judged a Kids Art Contest for 4th graders in Bay County focusing on endangered wildlife. For this effort, he has received the Friend of Art Education Award from the Florida Art Education Association for 2021. Paul has donated numerous works of art to local charities.

Following the destruction of his gallery in 2018 by Hurricane Michael, he has relocated his studio to another location in downtown Panama City, where he is showing his work during special exhibit hours and by appointment.